those inspired moments came to Peter Evanchuck while trying to end his doc. on homeless poet Robert Payne

I guess every Director while editing his movie will have edits that simply seem to work at the time but a week later, they seem awkward sometimes even all wrong. Or if the Director is also the cameraman, then while looking at the edits suddenly remembers a sequence or a shot that would better open or close or move the movie in the right direction with significant meaning.
Just the other day that happened to me. I've been having some real problems with the ending of my doc. on a homeless poet, Robert Payne. I didn't shoot the final scene and i no longer am able to find him so i've been stuck. Well i suddenly had that great moment, that inspired moment of seeing what i already had shot that was in the bin would 'fit'. It would create an open ended ending where the endless, aimless movement of the homeless would be clearly seen; where complacency is the rigour mortis of the soul for all involved.. even those who seem unable to help themselves ... those shots came together, the sounds came together and the movie seemed to have a proper ending....
Posted by movieshandmade at 19:23 No comments:

I guess for all who only have one brain cell working like me, when suddenly for no apparent reason, u remember all the ways to edit ur movie with FCPro and it all works and u spend all ur time editing rather than trying to figure out what went wrong ... well, then when that happens, that's a miracle day for this Director/Editor.

So today and the past few editing days have been like that. So to all u elders who are trying to learn something as complex as FCPro don't give up u'll have 'miracle days' that'll turn into miracle weeks.

Not sure how all other producer/director/cameramen edit but i usually remember every shot/scene that I took which is in the bin so when i bring it up in the viewer my memory is refreshed as i recall the entire shot and what was going on around and in my head when i took it. This speeds up my ability to edit a scene/sequence, I find it beneficial to bike or kayak or walk around and think about the movie then in my head make decisions what should go where and my head plays the shot into the scene and i know from my head's viewer how that will look - this facility helps me greatly

Today all that came together for a new addition to the opening and now she be smooth and very interesting to watch where time, place and intrigue are all satisfied in the viewers mind.

p.s. the motto is 'The Director that learns to edit their movie, saves a whack o dough!' I have a great fine cut editor who then goes over it and makes everything that needs to be smoother... smoother ... ahhh life is then very good to see one's hard work come alive and become finished.
Posted by movieshandmade at 16:58 No comments:

movie making shouldn't be about wearing out those creative juices but putting them into the shot.scene

So many movie guys work long tortuous hours trying to set-up, line-up 'get' the shot properly - after a dozen or more hours daily and a few weeks or more at it, usually the crew & cast is exhausted. It seems, to some, a hallmark of success to look worn out and tired while making a feature film. The more bags under ur eyes the more u seem to be working hard.

I never could figure that out. I seems incompetent to me that one can't do it quicker that one can't use all one's energy to 'create original' footage rather than use their energy waiting and waiting and waiting for the next scene or shot. Unfortunately doing so many things 'around' the shot preparing to make it exhausts everyone and in particular the one most responsible for the creative uniqueness of the shot and scene, the director. Taking so long, wearing our energy means that by the time the director is ready to 'create' the 'feel' of the shot - he no longer feels much more than to get 'that damn shot in the camera'

I've never understood that wearing oneself out and making a common, mediocre movie was the way to go.

Now for the independent moviemaker going digital, using natural light with modest augmentation, simplifying and speeding up the set-ups so the director, camera and the cast are at the peak of their creative juices rather than at the end seems the way to go for me.
Posted by movieshandmade at 04:07 1 comment:

ahhhhhhh the problems that FCPro gives one

Don't know why but yesterday i clicked something wrong and lost my ability to use the magic mouse to right click and set in dissolves/fades in the 'time line' so fiddle while my brain burned, contact co-op's to get help but they don't know - seems problem was unique - yeah right so what's new - FCPro is like that - one can never really know all that it can do unless one is a full time pro. editor, at least that's what i think.

Nayway, i read the manual, fiddled some more and suddenly that small pop up window info seemed so simple i.e. go to bin, click on effects, select effect ikon us wish to return to default double click it and bingo it worked.

So now i'm back clicking the magic mouse to make it's magic on time line transitions with ease and EUREKA it works mighty fine.
Posted by movieshandmade at 04:51 No comments: 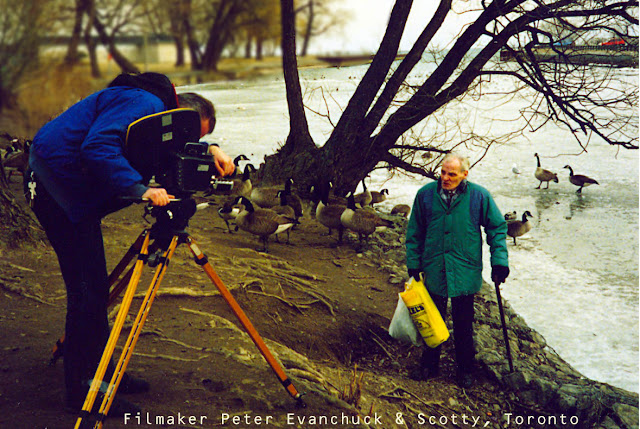 Picture is from decades back, when i was still shooting with either my Arri BL or my CP16mm cameras - the old CP16 is from my days shooting for the Wild World of Sports - in those days the reliable, durable CP16 was the industry standard since it also allowed a sound stripe to be recorded directly on the 16mm film - using reversal film stock meant that u process/print and go directly to air - so fast and cheap.

SCOTTY loved movies, especially the old ones. His dream was to be in a movie and this was that movie. During his last days he came to live with us in our Loft and we cared for him until his dying days when the Paramedics came to take him away to the Western Hospital where he died shorly after admittance. A very sad day for many of us.

That movie was never finished and now that digital is here, it may be finished... that is when i can afford to transfer all the 16mm film and sound tracks to HD Digital not cheap. That was always the problem in the old days when one shot, process and printed, tsfr'd sound to 16mm mag, edited, neg tsfr, etc., etc., to final release prints the cost came hot and heavy at the beginning and at the end.

Of course, with HD Digital cost is no longer in stock, tsfrs, etc., and now for the freelance independent film/video maker who want to learn all the aspects necessary to go from camera to screen is all soooooo easy compared to those old days of film. (mind u learning FinalCut Pro has been a mind bender for me and i think it's a software that one learns new stuff on every day/week/month... next will be learning Pro Logic probably that'll take me a year to get but then Happy Sailing for this movieMAKER...)
Posted by movieshandmade at 13:03 1 comment: